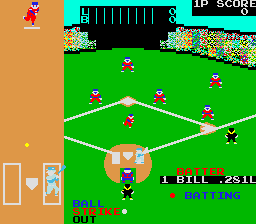 Champion Baseball (チャンピオン ベースボール?) is a 1983 baseball arcade game developed by Alpha Denshi and published by Sega. The game was a sophisticated sports game for its time, displaying the playfield using multiple camera angles, including a close-up shot of the batter and pitcher, and giving players the option of selecting relief pitchers or pinch hitters, while an umpire looks on attentively to make the game calls. The game became very popular in Japanese arcades when released in 1983, at one point enjoying a level of popularity comparable to Space Invaders according to Sega.

The player controls a baseball team, against a computer-controlled team, with the player batting at the top of each inning. In a two-player game, each will play independently against the computer, one inning at a time. Standard baseball rules apply, with the player awarded points for various accomplishments such as hitting a pitch, safely reaching any base, pitching a strike, getting a computer player out, or retiring the computer's side to end an inning.

Before play begins, the player can choose which city/state to represent from a list containing Los Angeles, Cincinnati, Atlanta, Pittsburg (probably a typo for Pittsburgh, Pennsylvania), Chicago, Montreal, St. Louis, Boston, Milwaukee, New York, California and Texas (all of whom had major-league baseball franchises in 1983). The computer then randomly selects from among the remaining cities.

If at any time the computer team has scored more runs than the player, the game immediately ends. The high-scores list ("FAR OUT PLAYERS") can hold the initials of up to six players.

Reviewer: ctjrock - favoritefavoritefavoritefavoritefavorite - December 17, 2016
Subject: I have achieved a lifelong video game goal!!!!
So this game used to be at my local Chuck E Cheese's and I used to play it constantly and was never ever to make it past the 2nd or 3rd inning at best in a one player game. It has always vexed me. Imagine my delight some 30 years later to see this game here on the archive.org!

I've been playing this game periodically for the past 4 or 5 months - probably 100 games or so and have developed a few strategies. One, try to hit the ball to the third base side. Even if the ball is fielded by the 3rd baseman, odds are your batter will run out the throw. Two, be patient and look for pitching patterns to predict pitches. The computer will give you walks. Three, you can force the computer to make throws if you fake run to a base and that will open opportunities for other runners to advance. Four, when pitching, I pretty much pitch fast and hard inside while moving the ball trying to jam the batter. Sometimes, this leads to a pop fly to dead center which will be caught for an out and if a runner is already on base, he will be running and you can double him up.

I decided to get a game in yesterday and I was on a hot hitting streak. I'm up 10-1 after 3 and was expecting one of the standard computer 7-8 run rallies, but it never came. Heading into the 7th, I was up 14-4. The last 3 innings, I put up 13 and ended up winning 27-12 for my first win over the computer and I achieved a personal video game goal of beating this game. My record must be something like 1-150. There are a few cool screens at the end of the game including a misspelling which fits in line with the backstory of the development of this game. I'll try to post them somewhere and provide the links if anyone's interested.

Reviewer: brentreede62 - - April 2, 2015
Subject: Why won't these load anymore?
I've loved playing this game but now none of them will load after pressing the Begin button. Any thoughts?